Once again, we decided to go the virtual route with our Christmas cards and letter. 2015 did not leave much spare room for such things (in fact, if I finish writing this before Christmas, it will be a miracle!). It was the year Katie turned 10 and Nathan turned 13! It was also the year we had a new baby (…and that new baby had open heart surgery!! What a year it was!

Our lives certainly changed when our Little Duck finally arrived on April 12th at 2:45am at Bay Area Birth Center, after days of laboring on and off at home! It was a wonderful, midwife-assisted, natural birth and we truly loved the experience. (Read more here.)  I never thought I would say that about birth! Bodies can do amazing things when they are allowed to. It was so different than a hospital birth and if we have any more babies, we will go that route again for sure! We got the first of many surprises upon meeting our Little Duck, when we discovered she was a GIRL, who we named Josephine Danielle! Little did we know that Josie had QUITE an adventure ahead of her! At her two month well-check, the pediatrician heard a murmur and ordered an echocardiogram. On June 30th, we found out that she was in congestive heart failure because she had a very large VSD with significant shunting and we spent 10 days in the hospital with her, trying to get her heart failure under control and to get her to gain weight. (Read more here.) From then on, life was consumed by getting Josie to grow and eat and taking her to lots of clinic appointments and tests. We also found out she has a milk protein allergy that was working against her growth, as well. On October 23rd, she had open heart surgery to repair the hole in her heart and it went beautifully! She spent just 5 days in the hospital and her recovery went very smoothly. (Read more here.) Her growth has taken off and she is doing very well! Congenital heart defects are never considered cured and she will be a lifelong heart patient, but her heart is repaired and functioning well right now and should continue to do so, though she will be watched closely for her entire life. In spite of the major challenges she has faced this year, she is such a joy! She is an interesting mix of easy and challenging. She is so content and happy as long as all of her needs are met, but sometimes those needs include being held 24/7, having mom in the backseat of the car on every drive, staying up until after 1am, and having mom’s hand in the exact right spot on her back all night long. Overall, she is very predictable and a lovely, happy baby girl. We are so thankful to see her thriving these days! It is the best gift we could hope to receive this year! 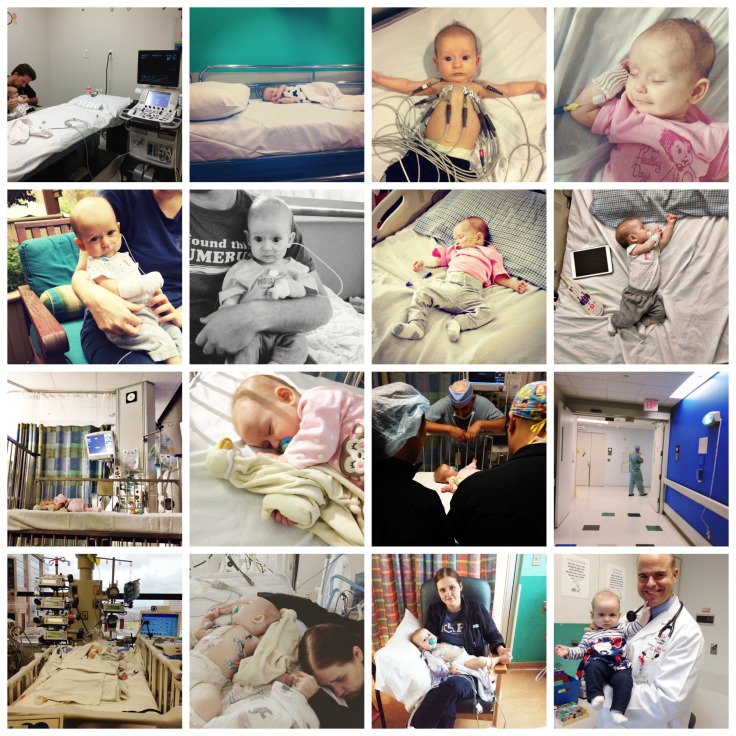 Before Josie’s arrival, we expected our lives to change in many ways as we revisited the baby days after such a long departure, but there were SO many unexpected changes as a result of her heart condition. The first couple months of her life, she was desperately trying to keep herself from starving to death so I nursed her around the clock and did little else, though we didn’t know why she nursed so constantly. After her diagnosis, I switched to pumping for her since her heart could not handle the work of nursing and have spent a LOT of time hooked to a pump and obsessing over my milk supply since then. Pumping is much harder than nursing because when you are nursing, at least the baby is happy and eating! That isn’t the case with pumping and it can be a difficult balance. When her milk protein allergy was diagnosed, I gave up all forms of dairy for her as well. Feeding her has been consuming to say the least! I’m still homeschooling Katie, but she has taken a much more active role in her education this year than she did last year. I think it has actually worked out better for her, surprisingly! Josh has taken over several Katie-related tasks so I can focus on the things Josie needs from me and he has had to take a step back from some fun things like camping with scouts to help things run smoothly here at home. We’ve also spent most of the year in quarantine, trying to keep Josie healthy before surgery and during recovery. However, we’ve still managed to spend time with our close friends, even if a large portion of it took place in the hospital, and see our families some. We’ve made time for game afternoons, fake Halloween, and Friendsgiving!  Josh has nearly completed a Descent campaign (an RPG he plays with a few friends) and played several round of disc golf with buddies, so we’ve fit in a good amount of fun in spite of the tough stuff. We’ve had to divide and conquer when it comes to the big kids schedules and take turns being present at their events because someone is always at home with Josie, but we’re making it work! Our family got to enjoy a weekend in Galveston in a crazy suite at the Moody Gardens hotel thanks to the kindness of Josh’s employer and one of his coworkers! It was amazing and we are still talking about it. We have been so blessed with all of the love and support we have been given this year and it has made all of the challenges seem much smaller than they were in reality! 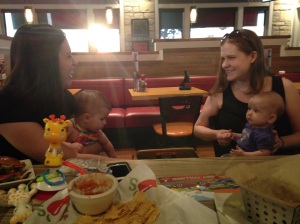 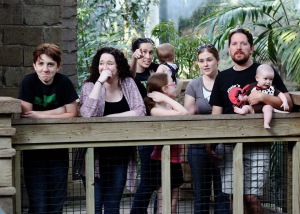 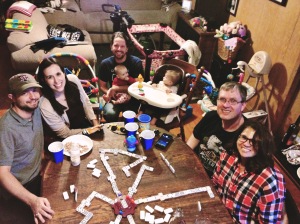 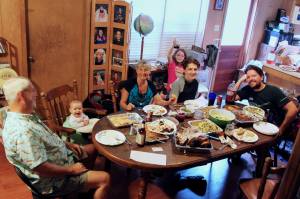 Nathaniel is 13 and considerably taller than me these days. He’s in 8th grade and doing great in school. It is his 4th year of playing alto saxophone and he is in the symphonic band once again. He is still participating in Boy Scouts, which encourages him to venture into the outdoors once in a while, and also spends copious amounts of time playing computer games and Skyping with friends. While, I  cannot believe we have a teenager, I sure do like this particular teenager. Some of my favorite parts of the year were spent introducing him to my favorite show, The Office, and watching Gilmore Girls with him. He really loves his baby sister and she loves him right back! When asked about his year, he told me it was “memetastic”.

Katie is 10 and in 5th grade. Homeschooling is still going really well! I worried about how it would go before Josie came along and once she was diagnosed we had to completely overhaul our curriculum plans for the year, but like I mentioned before, I think it turned out to be a better fit for Katie in the end. She is so much healthier now that she is no longer attending traditional school! We are so thankful that she has had a healthy year, it has made things so much easier to balance. We’ve had to let a lot of things slide this year (like therapies and medical appointments) while we focused on Josie, so I predict that we will be playing catch up in 2016! I am so thankful her health has been stable enough to give us this kind of leeway this year, in previous years I don’t know how we could have managed to keep everyone afloat! Katie is still participating in theater classes and was in a 60’s musical revue in the spring and Seussical Jr. this winter. She loves YouTube, Skylanders, Minecraft, and talking with her friends via FaceTime and Skype. She also ate her first sandwich EVER in November and she will gladly tell you all about her deep lover for Jimmy John’s BLT, hold the LT. Major milestone!! Katie also loves her new role as big sister and the hardest part of her year was the 6 weeks following Josie’s surgery when she could not hold her or pick her up! I don’t know what I would do without her help, especially when I have to pump and Josie is not in the mood for solo playtime or sleeping! I worried so much about how Katie would feel about losing her place as the baby of the family, but she has been too busy being the best big sister ever to care about that. When asked about her year, she said it was “THE BEST YEAR EVER!”. Of course. 🙂 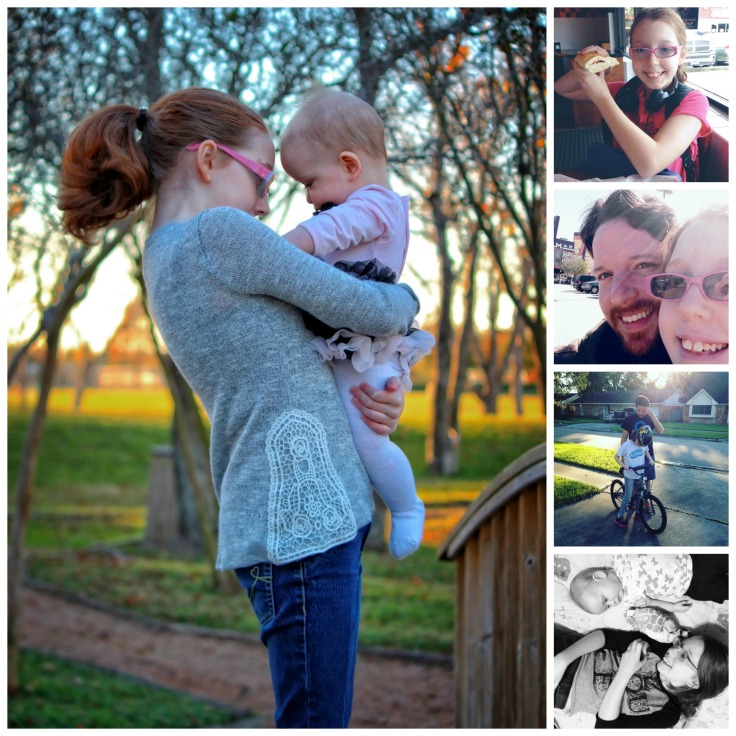 If you survived reading this novel, thank you! You get a gold star! We hope that each of you will have a very merry Christmas and a wonderfully blessed 2016!

One thought on “Christmas Letter 2015”