Last Sunday, I had the opportunity to take my big kids (and my son’s girlfriend) to a showing of A Christmas Carol at the Alley Theatre. It was the first time I’ve seen a show at the Alley and I was incredibly impressed. A Christmas Carol is one of those stories that we all know so well and have seen innumerable adaptations of, but the Alley’s show brought new life to it and it really felt fresh and lively. The sets and visuals were pretty spectacular and there was was a great balance of spookiness and humor. K laughed out loud several times and said she almost got a little too scared once or twice. We all really enjoyed it (though my son will tell you that it would have been better if I hadn’t made him pose for pictures)! 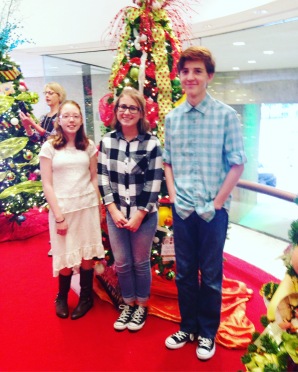 It was especially nice to be able to take K to the show! She is currently enrolled in a live role-playing literature course for A Christmas Carol via Minecraft for homeschool (Skrafty has some really great offerings!), so it counted as a really cool field trip. She is also my theater kid and this was a perfect way to kick off her Christmas show week. She said “Wow. It is SO nice to be on the other side of the stage for a change! I can relax!” It was a treat for her to get to watch professionals doing what she loves to do! She was very impressed by the show and told me that she had to keep reminding herself she was watching something REAL and LIVE and not just a movie where they get lots of takes to get things right. She was also very glad that she didn’t have to memorize all those lines! So many monologues! It has been a crazy week of shows for her and she managed to lose both her shirt and pants for Act 1 on the FIRST night, but it is nice to have that bit of perspective to balance things out…we aren’t lose costumes AND having to memorize lengthy monologues! Ha! Christmas cheer, a great show, and a dose of perspective…what a great gift to us all!